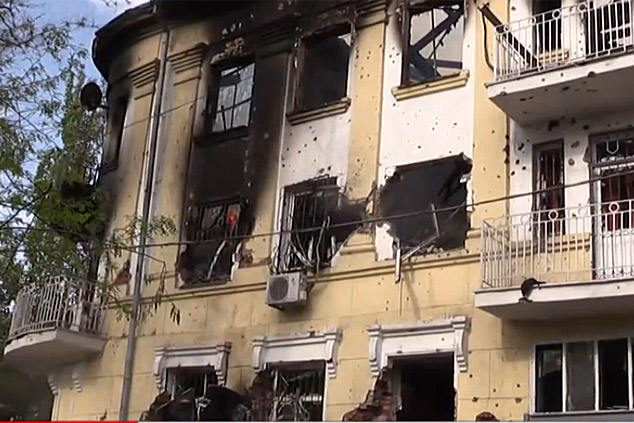 Last February, a fascist putsch took place in Ukraine. With the open support of Washington and its European allies, the regime installed by Washington and Berlin is now engaging in a reign of terror against popular resistance. That is the significance of the events in the major eastern Ukrainian city of Mariupol on May 9.
The violence was clearly meant to provoke on the 69th anniversary of the defeat of Nazi Germany by the Soviet Red Army. Armoured personnel carriers and heavily armed troops attacked unarmed civilians in the city, and Kiev claimed to have killed some 20 people. The Obama administration immediately blamed the violent repression on “pro-Russian separatists.”
The May 9 celebrations of the defeat of Nazi Germany are despised by the Neo-Nazi gangs that propelled the US puppet régime into power in Kiev. These are admirers of Hitler and, with Washington's full support, they are encouraging the attacks against popular opposition.
If you've read anything about May 9 in the Western media, you have almost certainly been told lies. Let's hear and see the truth from someone who was there.

- prh, Editor
Axis of Logic
As I was writing an article regarding the tragedy that was unfolding in Mariupol on May 9 – the most revered day of the calendar celebrated in former Soviet countries - Donetsk and Lugansk conducted their referendums, resulting in a 90% vote for independence from the new Ukrainian regime.

It would be very naive to expect Russia to take these two republics under its wing. The Russian Federation does not appear to have any intention to attach anymore territory, and still urges civilized dialogue between the South-East and Kiev.

Unfortunately, it is highly unlikely that any dialogue is possible after so much spilling of innocent blood. Kiev chose the politics of intimidation and terror, intertwined with a patent mistrust. What took place in Odessa is called “Red Line 1”.  Although this horrific and inhumane action was covered by some media, the entire world still refused to react, as moral obligations would suggest they should, by stopping the junta from spilling the blood of its own people and calling out for justice. So the junta crossed another red line.

Another massacre in Mariupol (Donetsk’s province) was personally initiated and supervised by Oleg Lyashko, a Presidential candidate.

He actually replaced the commander of this “operation” with himself. After a call from the chief of police in Mariupol, Lyashko gave the order to invade Mariupol. He hoped to shine his political star by achieving his own victory on May 9, the day when people celebrate the Victory in Great Fatherland war over fascism. Lyashko personally gave an order to shoot all the "vatniks" and "colorads" (insulting words for Russians and anti-fascists). Within the order was the specific task of shooting any soldier who refused to participate. Later, seeing how his "anti-terrorist operation” descended into an absolute fiasco, Lyashko ran away from Mariupol.

The Chief of police in Mariupol, Androshuk, after the initial phone conversation with Lyashko, gave orders to his officers to conduct a punitive operation of punishment against the Mariupol people. The entire body of police refused to follow the order. Androschuk shot one of the officers, triggering a revolt among the remaining police. Androschuk escaped into his office and called the “Right Sector” for help.

While the people in the city were celebrating Victory Day, the invaders entered  peaceful Mariupol much as the Nazis did 70 years ago. The punitive group, battalions "Dnipro" and "Azov", had assault rifles, machine guns, grenade launchers, BMP 9 + 1 APC, heavy armoured vehicles and tanks, and combat infantry.

It is fair to call them fascists.

They moved close to the police department building and soon opened fire from HGV, machine guns, and grenade launchers. Some of Right Sectors went from house to house and shot at the windows where people filmed everything on cameras and phones. They blocked the area around police station.

During combat, Androschuk snuck out of the building through a corridor. But in the street, he was captured by local people. His fate is presently unknown.

Unarmed civilians were standing around shouting: ”Fascists”, “Get out of our city”, “They are killing our police!”, “How would you look at your Mom’s eyes?” National Guard gunmen shot civilians on sight to stop them from approaching the police department building. Police officers became “terrorists” for only one reason: THEY REFUSED TO RAISE WEAPONS AGAINST THEIR FELLOW COUNTRYMEN. There were about 50 people at the police station, including women.

Next, the Right Sector used the same tactic as they did in Odessa. They blocked the building and burned it down to the ground.

The police station was completely destroyed by fire. Ambulances rushing to the scene to rescue the wounded were greeted by bursts of gunfire from the fascists.

During the day, gunmen in black uniforms shot and intimidated citizens.

Civilians began to oppose the fascist invaders. The fascists lost one BMP. Several members of the punitive "Azov" and "Dnipro” died. Then the fascists (no other word can be used toward these creatures) found themselves without any commanders and tried to leave the city. Actually, they ran away.

It is still unclear how many people were killed in Mariupol. The man in this video claimed that there were over one hundred victims.

Where will the next “red line” take place?  And how many more “red lines” does the World need in order to wake up? This is not a war between Russians and Ukrainians, and this is not a war of all against all. This is a war of Russian people for their identity and freedom. Now when the most hated thing, as fascism is for Russians, has come into our homes, people need to determine what values they are standing up for and what kind of future we see for ourselves, and who they are – Russian people, meaning the spiritual condition, not necessary nationality.

This is the war of the Russian world against the Nazis. This is a Nazi’s war against the civilian population.

This is also a time for the West to clarify for themselves who they want to be with and what kind of future they choose.

On May 11, the people of Donetsk and Lugansk provinces took part in Referendums and declared their Independence.