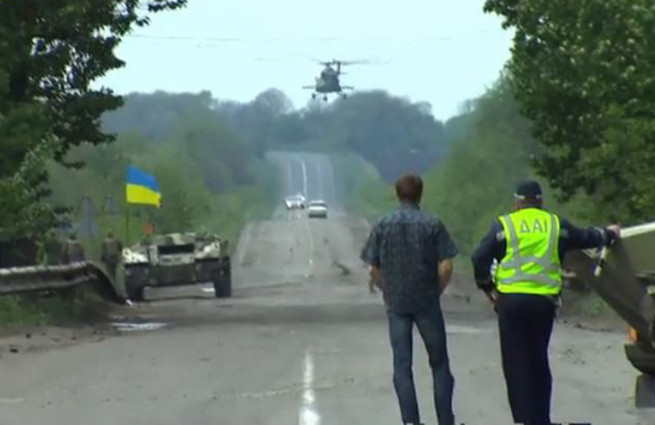 Axis of Logic Exclusive
Monday, May 19, 2014
The General Prosecutor's Office, most likely under orders given by the pro-American Kiev junta, declared Donetsk and Lugansk People's Republic just proclaimed by popular referendum on May 11, "terrorist organizations”.

The referendums on May 11 demonstrated a highly engaged civic activity of the general populace, proving that the people of Donbas* chose their future. Voter turnouts were very high, and the results were clear mandates for independence. They chose a future without being the subjected to the tyranny of fascism.

Ukrainian media, commenting on events in Donbas, blatantly fabricated a story claiming an absolute zero turnout for the referendums. “What a shame”, said Maxim Raveba, the famous journalist from Kiev.

In an atmosphere of total slander and colossal lies, the stunning referendum involving the highest act of civic duty was undertaken. It was an explosion of popular initiative. All residents, united as one, came in droves to the polls. People voted for independence – and against fascist Ukraine.

The referendums showed that the whole of Donbas are "separatists and terrorists”, according to the West and its puppets in Kiev. The citizens of Donetsk voted for independence. Now we need to form our own governments and take active measures to break the blockade. The entire region is besieged: there are women, children, and elderly people trapped. Therefore, creation of a humanitarian corridor is necessary. Of utmost importance is not to accept defeat! "

Despite all the clamoring for peace talks, the junta continues to commit atrocities and gross violations of human rights in their terrorist operation. No, I have not made an error by labeling this a “terrorist” rather than an “anti-terrorist” operation. These actions are 100 percent terrorist in nature. Moreover, the junta targeted this operation for the purpose of the destruction of its own people.


By definition, the junta launched a terrorist operation against its own civilian population. In addition, this operation is punitive in its far-reaching extent. It is the punishment of people who dared to wish to speak their native language. This is a draconian punitive measure, if the first law enacted by the new “government” prohibited speaking in Russian under threat of arrest and detainment.

This is punishment of people for wanting to keep their shrines, holidays, and monuments which are not obscure sectarian rituals or idols. The May 9 celebrations that Kiev shut down was a celebration of the Great Victory over fascism, and there are monuments to the soldiers – liberators – monuments to the great Russian military commanders and to Lenin that had been destroyed in almost all cities by “banderovtsi” who had crept out of the crevices of Western Ukraine.

Looking back into the portal of history, Lenin, after the Bolsheviks seized power, initially issued two decrees: Decree About the Peace; and Decree About the Land. The first decree stopped that protracted, exhausting war (Russia’s futile participation in the First World War) and the second gave land to the suffering peasants for their own use, peasants who had been deprived of land ownership for centuries. Then Lenin created the State Commission for Electrification of Russia (GOELRO) and the following decree “On eradication of illiteracy of population in RSFSR”, which raised the country to a very different economic and educational level in a short period of time.

When the Right Sector tried to destroy a statue of Lenin in Zaporozhye, where there is a large hydroelectric station, DneroGES, some of the general populace rose up and formed a live chain around Lenin’s monument in its defense while exclaiming: “Then ruin DneroGES too, because it was built on Lenin's plan”.

The terrorist operation is a punishment of people who dared to defend their dignity and their national identity. They dared to stand up for their faith. The older man in the following video says: “They have got into our churches. They want us to change our beliefs. We are Christians, not Christ-sellers. You know, everywhere in the world if the faith becomes raped, war starts.”


They dared to fight for their lives under pressure and fear because of the boisterous screaming by fascists of "Moskal (Russians) on knives", the military bombardment of Slavic and Kramatorsk, and seeing the horror in Odessa and the massacre in Mariupol.

Thus, the two defined sides were determined and consolidated themselves. One side is pulling society apart by imposing ethnic divisions and their supposed moral values and historical traditions, and killing those who do not follow them; the other side is fighting for their basic human rights.

It’s the people on the first side who are the real separatists by all accounts. What crimes are those on the second side punished for? After all, they did not immediately take up the arms. They only responded to the very real oppression, both moral and physical. Besides, they are on their own territory and they are defending their land and families.

This is Kramators'k May 18, 2014 - the city is in smoke, the siren sounds, there are fights in Kramatorsk:

Bombing cities like this does not qualify as an anti-terrorist operation under any circumstances.

“MFA: Punitive action against its people demonstrate the hypocrisy of the Kiev authorities. Moscow insists on the immediate cessation of Kiev ordered hostilities in the South-East of Ukraine.” [Statement by the Foreign Ministry. May 17, 2014]

Vladimir Gromov, the Authorized Army Staff of People Republic of Lugansk, stated that the representatives of the People's Republic of Lugansk are convinced that neither side wants the war. He asks the Ukrainian military to consider this and stop the senseless bloodshed. "The junta uses the cover of their actions with ideas of a united Ukraine, but in fact they destroy the country with their own hands," he said.

The number of victims from both sides is growing. Kiev hides data on losses incurred. The simple reason is that if the population actually knew how many deaths had occurred it would cause the government to probably face a popular uprising of its own, leading the their own expulsion and forcible compensation paid out to the families of the dead.

It is clear that the junta did not intend to publicize the dismal performance of its operations and will do its utmost to conceal them. As well as the fact that the Ukrainian army has on occasion defected to the protesters side, or has deserted the location it was supposed to occupy, or mutiny against orders to fire on civilians. Young men are conscripted into the army and forced to fight against their own countrymen by fear of court martial and a prison term. Junta’s dogs, Right Sector, caught fleeing deserters and frog-marched them to court martial. Most do not want to fight. Then, in the army, if they refused to shoot civilians they are killed by the Right Sector.

The Peoples Mayor of Slavyansk, Vyacheslav Ponomarev, reported the murder of ten people that tried to defect to their side.

On May 17th a small group of protesters- only about a dozen – decided to hold talks with Ukrainian soldiers occupying the airfield.

There were about 300 soldiers based on a military airfield. The protesters propositioned the soldiers to lay down their weapons and leave the territory of the People's Republic of Donetsk safely, unmolested in any way.  Under these conditions the armed wing of the protestors guaranteed them full security and safe passage to their destination. The armed protestors could easily have had an opportunity to launch a surprise incursion having formed an armed perimeter around the airfield. Instead they preferred a peaceful negotiation and no violence towards anyone.

The solders were willing to go along with the evacuation plan, but the officers refused to negotiate and immediately opened the fire. The fact that less than a dozen volunteers offered safe passage to three hundred security forces who agreed to it, unlike their officers, speaks volumes within itself.

On May 17th at the information center "South-Eastern Front" had a Skype dialogue with Natalia Bruce from Slavyansk militias.

Natalia said: "the previous night was terrible. In the area of Andreevka village a terrible battle took a place. People living in that area called all night and we could hear children crying. But people did not leave their homes. Kiev considers us terrorists. They should come and see how we are terrorists, but they were not brazen enough to come here, they won’t come.

Slavyansk today is blockaded. But our self-defense units control the corridor through which we receive food, medicine and essential supplies.

Fighting continues, the militants of Kiev junta execute their wounded and bury them without ceremony –in a mass grave. I would like to appeal to Ukrainian mothers - do not let your children fight against us!"

People of the South-East resistance stand up to protect their land and all the Russian land from the neo-Nazis invasion. They are the saviors and defenders and it makes them strong. This is a popular peoples protest.
Now even the women of Donetsk have formed militias, further proof that this protest is supported by all civilians. Women present themselves as a Russian Orthodox army.

Do you still want to call these people “terrorists”?